This author has not yet filled in any details.
So far North High School has created 5 blog entries.

Graduation will be held this year on Friday, June 5 at 7:00 p.m. at the Oregon State Fairgrounds Pavilion. Below is a list of the senior calendar of events. We will update this from time to time when or if new items are added. 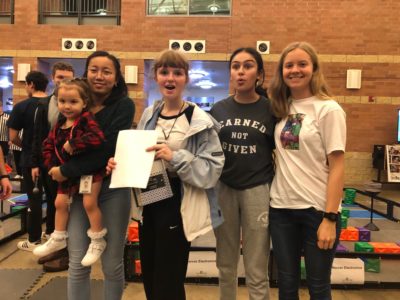 RoboViks Team Valkyrie, the North Salem High School All-Female Robotics Team compete in the VEX Robotics Competitions. Student teams are tasked with designing and building a robot to play against other teams in a game-based engineering challenge. Classroom STEM (Science, Technology, Engineering and Mathematics) concepts are put to the test as students learn lifelong skills in teamwork, leadership, communications and more. Tournaments are held year around at regional, state and national levels and culminate at the VEX Robotics World Championship each April.

On January 24 at a local competition, Team Valkyrie won the Design Award qualifying them for Nationals being held at Council Bluffs, Iowa this year April 2 -4. Teams from around the world are invited to this competition, the 2020 CREATE U.S. Open Robotics Championship, a 3-day event and one of the largest robotics tournaments in the world.

Fundraising opportunities for Team Valkyrie are listed below. We are accepting cash donations and welcome your participation in one of the following fundraisers:

Salem-Keizer School district is committed to making every effort to provide qualifying students access to athletic and testing opportunities. The district is offering discounts for these opportunities to families that qualify as low income. If you would like to see if your family qualifies select the link below and review the household size and income charts. Once you have determined if you qualify for free or reduced lunch benefits, submit your information along with your students’ ID number. The process is quick and simple.

SALEM, Ore. – Last June, five Salem-Keizer Public Schools (SKPS) students provided public comments before the Board of Directors regarding the district’s dress code and requesting updates. Unbeknownst to them, district officials had already begun looking at the dress code and discussing updates with representatives from the student equity committee. With feedback from building administrators, SKPS has updated its dress code. To view the current dress code select the link below.

Does your student’s teacher or school currently use the Remind App to communicate about upcoming events, assignments and more? Through a recent partnership with the Oregon Department of Education, all Salem-Keizer Public Schools will now have access to the Remind App to help improve and streamline communication with our students and families.

The Remind App offers educators, students, parents and guardians a safe and effective way to communicate about school assignments and grades, ask questions, collaborate and more. Be sure to download the Remind app today and contact your school to learn more about specific tools being utilized in your student classrooms.

For more information about the Remind App select this link: remind.com